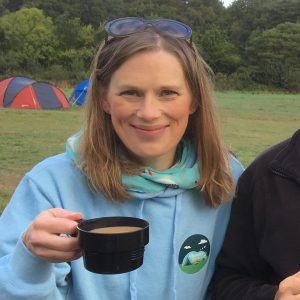 When I think of the greatest ‘what if I hadn’t done that’ moments of my life, there are two that jump out at me.

I can’t remember the exact moment I first saw the tweet about Comms Unplugged, some time around June 2017, but I can remember my reaction. Camping? A day of high-calibre speakers and inspiring comms workshops? In Dorset? That sounds bloody amazing!

I was, at that point, the mother of a three-year-old boy and the longest time I had spent away from him was around 18 hours. I was feeling a kind of post-maternity paranoia about getting too comfortable and letting my progress slide. I was ready for some me time. And I really missed camping.

So off I set a couple of months later, tent packed, sat nav programmed, snacks and booze in the boot and wondering what on earth the next couple of days would hold.

If you’ve read other Comms Unplugged blogs, including the poem I wrote last year, you probably already have a reasonable idea of how it unfolded. We unplugged our phones, plugged into our creativity and consciousness and embraced two days of learning, sharing, and connecting, all outdoors and frequently around a campfire.

So instead of dwelling on that, I’d like to talk about what happened next.

Once we were plugged back into the Twittersphere, the CU17 ‘originals’ could not stop chattering. We were so excited about our new found friendships, and so eager to relive and share our experience we felt it necessary to start a WhatsApp group, just to avoid annoying the pants off all our other Twitter pals with our incessant commentary about how brilliant Comms Unplugged was.

This bantering band has continued to this day, with daily conversations about subjects as diverse as beach running, leadership mindsets, creative diary planning and Leon’s breakfasts. A year and a half on, we are already anticipating our #CU19 reunion. And by the way, following Comms Unplugged 2018 the same thing happened, and now there is also a thriving CU18 WhatsApp chat, full of support, learning and laughter for that cohort. These groups have been of incredible value for everyone involved, from providing advice for dealing with work challenges, to opening up out-of-work opportunities such as the breath-taking experience of an open water swim in Loch Lomond.

But what of me and my own journey?

What if I hadn’t gone?

If I hadn’t gone to Comms Unplugged I wouldn’t have got to know the amazing community of ‘unpluggers’ I now chat with almost daily, about everything from work or personal struggles to cake recipes.

I wouldn’t have been on a Fresh Air Fridays mindfulness session, which led to me tackling issues I had with my mental health, better understanding my mindset and personal values, and returning to dance lessons after almost 10 years.

I might not have been so invested in entering the 2018 UnAwards (created by Darren Caveney, also a CU organiser) which resulted in a shortlisting for my ‘Team of the Year’ submission commending my colleagues at Bradford Council.

And I certainly would not have had a gaggle of giddy friends to go for curry with, the night before the UnAwards ceremony in Birmingham.

I wouldn’t have met the (then) Head of Comms at Twitter.

I wouldn’t have won a year’s CIPR membership in the Comms Unplugged raffle.

I wouldn’t have mentioned, in the CU18 WhatsApp group, how irritated I was about all the white male images I saw in gifs on Twitter, which then led to me writing a blog post for Comms2Point0, which gained a ton of positive feedback, including from some of the comms professionals I most admire in our industry.

I wouldn’t have been to Philippa Stanton’s sensory workshop which introduced a new level of creativity – a message of making our communications live and breathe through describing senses such as smell, taste or sound in the words we use – injecting my communications with increased vitality as a result.

And finally, I wouldn’t have benefited from the expertise of many more industry leaders, including discussing agile engagement with Perago Wales, hearing Matt Desmier describe ‘branding in an era of post-truth’, and being told to ‘be more pirate’ by the captain of creativity, Alan Oram.

I recently wrote to a friend: “Having great experiences is all about trying things, taking risks and getting involved. Who knows what we miss when we don’t give it a go?”

Many of my communications peers and I have gained unparalleled growth, learning, opportunities and friendship, as a direct result of taking a leap of faith and joining CommsUnplugged.

And it shocks me to think of all the things I would have missed, had I not decided to buy that ticket back in June 2017.

As for what wouldn’t have happened if I hadn’t gone to that trapeze class… Come along to Comms Unplugged in September, and as we’re sitting around that camp fire, maybe I’ll tell you.

Josephine is a marketing and communications officer at Bradford Council with almost 15 years’ experience in communications and marketing in both the public and private sectors. She is a CIPR Yorkshire and Lincolnshire committee member and a committed life-long learner. Josephine is also a qualified yoga instructor, a mother and has performed stand up comedy on stage (how awesome is that?!). Say hi to Josephine on Twitter.