– Welcome to the “Chefs’ Table” of Comms Conferences –

As we are on countdown for #CU18, and the last tantalising snippets of what to expect have been released, the public sector Comms world is largely sitting in two camps. Not to be too ‘Game of Thrones’ but there are those who are wondering if this is for them (whether they have booked on or not), and those, particularly who took the plunge with #CU17, who are waiting impatiently and screaming ‘waaaaaaaah’ at every little nugget that sneaks out. 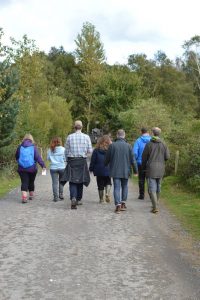 I always think that creating comms events for comms people is the devil’s own job. You are creating something for people who do exactly what you do. Who hasn’t been to a comms event and said ‘I wouldn’t have done it like that. Why did/didn’t they…’

In a way, it’s like the stage in Masterchef where the contestants have to serve dinner to a room full of the best chefs in the UK. It’s the exhilaration of impressing people they respect while ratifying they are among peers.

And that’s perhaps the first thing that you notice about Comms Unplugged. Its organised by a group of people who are massively talented, but have enormous respect for the job YOU do. That goes a long way, not just to making a super successful event, but for building the community that we’ve become part of. Because if you get Unplugged, you stay Unplugged.

So why was #CU17 so different for me?

Well, despite over 20 years in comms and marketing, 10 years in this role, I’ve always felt a bit isolated. The comms conferences I’ve attended have never actually facilitated networking, apart from in one particular venue, as you queued an inordinate time for the lift. If only you could linger over a coffee, not worry about queues, space, hanging on to your bag, whether you will be able to catch the 5pm train, if the Tube will be okay… and a dozen other encroaching thoughts.

CU has redefined networking. I mean, it’s so simple, it’s obvious, but none of us had done it before. Take away the distractions – no phones, no hashtags, no wifi (no hotel!). Serve great coffee, made to order by a talented barista, and delicious food. Promote relaxation, collaboration and shared experience. Take us out of our familiar environment. Give us time. Informal rules the day. Believe me, even my introverted self was making connections that I am still talking to now.

I get it if you think it’s all sounding a bit hippy dippy so far. And there’s more to conferencing than making a few business chums. We all know, as comms professionals, that good presentation still can’t hide bad content. So is CU ‘commsy’ enough?

That’s where the CU agenda delivers in spades, and from both expected and unexpected sources.

Like for example, 2017’s workshop by that rarest of creatures, a Chief Executive who has a Comms background. Imagine, if all public sector businesses were run by people who got the importance of Comms? That would be a game-changer in one fell swoop for all of us.

Conversely, the keynote session last year was delivered by Giles Henschel of Olives Et Al – what relevance can a high-end commercial business have for public sector and not-for-profit world? Giles is a slightly irreverent and highly entertaining guy who lives his brand. I mean LIVES it. Understands attention to detail. Next time someone asks if they can have a colour outside of your brand palette so they can stand out, remember that this guy rejected a logo design because it didn’t have the right model of motorbike in it. 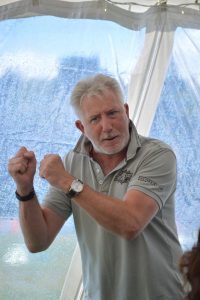 This year, the CU team have played an absolute blinder and secured a keynote address by the one and only Sam Hodges, former Head of Comms for the BBC, and now for Twitter. Talk about juxtaposition. Head of Comms at Twitter, in a field, sans tech. Not even an overhead projector. As the saying goes, I’m just sorry I don’t got popcorn…

And that’s the crux of Comms Unplugged. It’s the great reveal. It’s the stripped back, no hiding, ‘this is what I have to say’ experience. CU is set up so that we all hear each other, by both removing distractions and embracing the wellbeing that allows our frazzled brains to register what they have just experienced.

Some people will find that intimidating, or not for them. And that’s okay – it’s not for us to judge. Some of us produce our best work in a familiar, predictable environment.

But don’t underestimate the power of switching off to switch back on. If you are anything like me (and many other 2017 returners) it could just be the best thing you ever did.

Remember, almost anything will work again if you unplug it for a few minutes…

Jill Spurr is an original #unplugger since 2017. She works for the Vale of Aylesbury Housing Trust and delights us all by bringing her beautiful border collies to the field. Look out for her and the pups and make sure you say hello!