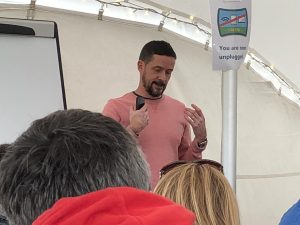 Here’s the second of a series of post-Comms Unplugged posts, taken from my (slightly amateurish) drawn notes.

This talk was eagerly anticipated by the unpluggers in attendance.

But first, a bit of context…

You know when you get prompts of ‘suggested people to follow’ on social media? Well I was on LinkedIn one day and up popped the head of comms at Twitter UK, Sam Hodges.

I thought he had a cool sounding job and, as a fan of Twitter for 10 years, I thought I would send Sam a connection request. He said yes. So all good.

Then I got to thinking that he would potentially make for a fascinating keynote speaker at Comms Unplugged. So I chatted with fellow organisers, Sally and Georgia, and we agreed that making an approach would be a good move, and we knew having Sam in our field would add an extra dollop of credibility to the event.

Now I won’t lie, I was slightly nervous asking the head of comms at Twitter to come and join us in a field in Dorset at an event with no social media, wifi, powerpoint or phone signal.

I guessed it would go one of two ways:  It would either be an absolute non-starter. Or, he might fancy the sound of something genuinely different.

Now Sam, the good sort that he is, said yes (so there is a lesson there about asking the question but also only doing so when you’re really confident in your product, which we were and are)

Now some of what is said in the field stays in the field. Seriously. We respect people’s opinions and space.

But below are the scribbled notes covering a lot of what Sam talked about and shared. 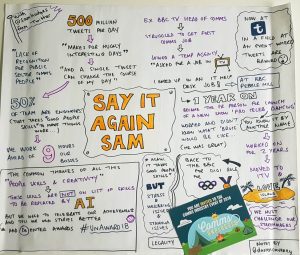 What was so good about the hour and a bit long chat was how candid Sam was with a room full of virtual strangers.

And no matter what your job role or organisation there was much that we could all identify with.

Most people working in the industry have experienced stressful times – in fact you could be in that place right now.

What we need are the skills to identify the signs and a place to go and a plan to adopt when it kicks in.

But for many that isn’t in place.

Dealing with stress, switching off and targeting wellbeing is fundamental to the ethos of Comms Unplugged and one of the reasons the event was created in the first place. Comms Unplugged – unashamedly – pitches activities for attendees to unplug, talk, share and listen. We won’t nail everything on the wellbeing agenda in two days, of course, but it’s a pretty good start point.

If your boss thought Comms Unplugged looked like a jolly – a bit hippy-ish – then that makes me suspect that he or she is unaware of the importance of wellbeing. There. I’ve said it.

Because the most important part for me of Sam’s talk was in spotting the signs and learning from past experiences. Many of us – and I include myself here – like to think we can be a bit invincible and keep on delivering. Like machines. And of course we are not machines.

If any of this is ticking a box for you then you are not alone. Dip into the brilliantly helpful communities on tap like Comms Unplugged and comms2point0.

What else did we learn?

But there were two other key take-outs for me…

The feedback we have had on Sam’s talk has been incredibly positive. Personally, I would say it was worth the day ticket entrance price alone. And I know that many of the attendees plan to keep in touch.

Sally, Georgia and I are very grateful for the time he gave to us for free. Sam, we owe you a beer.